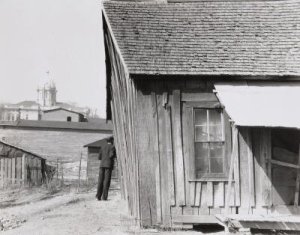 The barn-slab of board and batten
must be a house: tin roof propped
above the porch, four over four
window, wood shingles clumsy
as a mouthful of store-bought teeth.
The whole thing slants to the left,

toward a courthouse white against white sky.
The slim black man in neat black suit
leaning against the building’s tilt
holds the entire scene together.
Beyond him, a small clapboard shack,
a few twists of wire, and the long wall

well beyond which the courthouse looms.
But where is the black man looking?
What’s around the corner and why
doesn’t he acknowledge the camera,
an eight by ten Deardorff, pointed
squarely between his shoulder blades?

You’d think anyone in Tupelo
in 1936 would sense
the threat, the long lens piercing
otherwise impassable distance
to center this man in a city
he may have little cause to love.