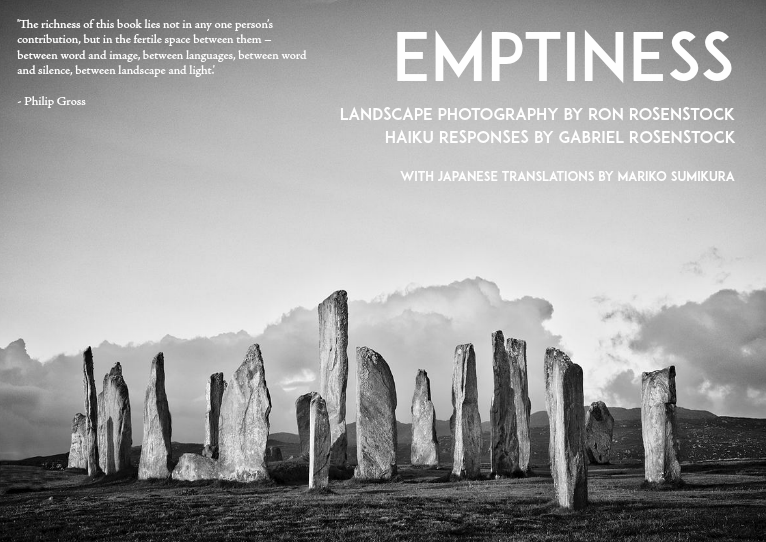 ‘Through photography I have sought to explore the space between the finite and the infinite. For me, infrared photography is on the borderline, the veil between the known and the unknown … a search for what is beyond the doorway of perception. What draws me—what speaks to me—is the mystery …’

In this selection of collaborative work from American photographer Ron Rosenstock and Irish poet and writer Gabriel Rosenstock, the combination of text and image draws out what lies ‘between the finite and the infinite’.

The scenes captured through Ron’s photography, devoid of human figures, allow us to re-engage with these environments through the unique moments of stillness which photography and poetry allow.
In turns meditative and precise, the haiku form, composed in Irish and English and accompanied by Japanese translations by Mariko Sumikura, enables Gabriel to explore these scenes for their traces of history and the revelations which can be attained from them, extending across languages and landscapes.


Gabriel Rosenstock, born c. 1949 in postcolonial Ireland, is a poet, haikuist, tankaist, and novelist with over 180 books  published. Recent titles include the comic detective novel My Head is Missing (Evertype, 2016) and the ekphrastic haiku volume Judgement Day (The Onslaught Press, 2016) in response to the collages of the anti-Nazi artist Kurt Waldmann. Among his awards is the Tamgha I Kidmat medal for services to literature. http://roghaghabriel.blogspot.ie/