Look out from the observation platform at Washington Pass.  The view’s the thing!  Mountains ranged before the glowing light, mountains before the wind; mountains after all that wind, that to the eye, resist encroaching trees.  Yet for some the weathering wood, sturdy retainer, and bolted steel at close perspective, assuring notice to the orange and black stain, graying from snow and rain, growth rings insistent as annual pleas, draw our focus, demand our first consideration now, during light, during clarity, during rare peace among those rocks seemingly indifferent to ice.

Ferry car deck serves as temporary road, dumping dark waves of Puget Sound aside, waves that spray the sturdy car-trap, with yellow rope reminding careless passengers that danger in a lurch, catastrophe in a lunge, eternity at depths with fishes for company.  So the highway waddles through whitecaps; fights light that escapes enveloping clouds; cherishes sun serving as spotlight for an audience of trees on the dark shore, danger and entertainment both; jilts passengers’ eyes straining for known landmarks, signs of the journey’s continuance; relieves those bobbing in desperation for deposit at the dock where the boat will shudder after coupling, revving its anticipation for return to Keystone. 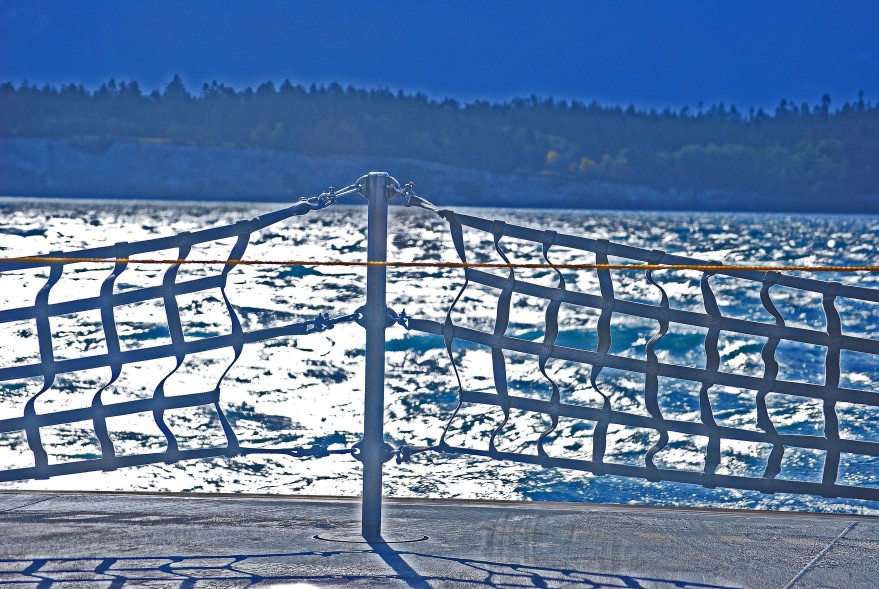 The search (which I shouldn’t have to explain) never ceases.  In this case, partially obscured beneath lacey cedars, light haloes its past usefulness; light surrenders to closing darkness children no longer served in remote Marblemount.  The search exposes epiphany: raw transformation of weeds and invading mosses compel display of the human condition, while behind this point of timely view, out of sight, but detectable by the ear, the Skagit River surges, propelling hurried rocks in their slow conversion from a Cascade peak into silt proceeding in perfect accord with natural law toward future compactions.

The whole point of such objects is mystery: a tree survives peculiarly from its own time, its own space, no known context, no comradeship in wood, no causes before gods, no election to elite membership, only sad credibility that buoyancy prevails, currents and tides obliged to the moon arbitrate.  Then to persist here on a shore, a fireless dragon guarding time, like a white bone completing a duty with dignity as though in a palace arbor.