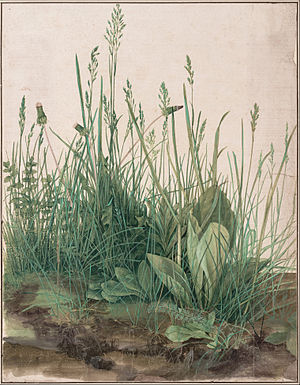 It sits in your studio, in water
this piece of another world,
this slice of not-so-still life
you dug with your spade.

It confuses the bees
this island among paint pots
and brushes; they linger
in its leaves, while your fingers
faithfully trace its living lines,
feverishly catching its essence
before its greenness falls
in on itself and dies.

It is a mini kingdom, supplanted.
Its small subjects, marooned,
look out on an ocean
of sunlit plaster and pine.

You wet your brush with its sea,
colouring in grey outlines;
steeping soul into the paper
replica – setting its sky on fire.

Bio: Karen is that awkward age between youth and wisdom – having neither. Her first attempt at being published via a Blue Peter competition was unsuccessful (she hastens to add that this was over 40 years ago). Since then she has had eight poems shortlisted on the Guardian newspaper’s on-line Poetry workshop; 2 poems published in the e-zine Loch Raven Review; has been published in Brittle Star magazine; two anthologies: The House at Black Moss published by Clitheroe Press, and the Cardiff Women’s Aid Writing Competition; was long-listed in the 2014 Wirral Festival of Firsts International poetry completion and she won second prize in the Chipping Sodbury 2014 International Poetry Festival.